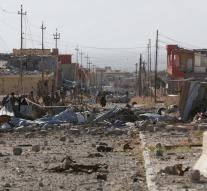 baghdad - The Syrian city of Sinjar is in the hands of Kurdish peshmerga. That the President of Iraqi Kurdistan, Massoud Barzani, declared Friday. The peshmerga have the extremists of the Islamic State (IS) expelled from the city.

IS kept the city from August occupied and spread death and destruction among the residents, especially Yazidis. The peshmerga began on the night of Wednesday to Thursday with some 7,500 fighters launched a major offensive to liberate the city from the hands of the extremists. They were supported by the US Air Force, who carried out bombings.