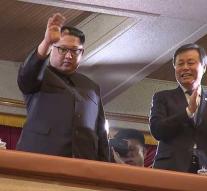 pyongyang - Artists from North and South Korea have given a joint performance in Pyongyang, the capital of North Korea. Afterwards they received a standing ovation from the approximately 12,000 spectators in the stadium, the South Korean news agency Yonhap reports. The North Korean leader Kim Jong-un did not show up; however, other senior officials from the countries were present.

The 2.5 hour show was named 'We are a unit'. Singers performed songs from the two countries. Videos of earlier cultural and sports exchanges between the democratic South and the dictatorial controlled North were also shown. For example, it involved films from temporary reunions of families separated by the Korea War.

The South Koreans return to their country in the short term. They spent four days in the North, who sent artists to South Korea earlier this year. The leaders of the two countries, the South Korean president Moon Jae-in and the North Korean leader Kim Jong-un, meet later this month in Panmunjom.