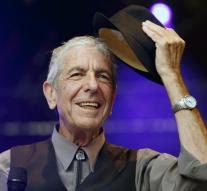 - Leonard Cohen was in the 60 world famous with his songs Suzanne, So Long Marianne and Bird on a Wire. Initially he started as a poet, with his monotonous, melancholy voice he had as a musician more successful. He died Thursday at the age of 82.

As Bob Dylan Cohen brought poetry into the pop music, which was still in its infancy. His poetic songs had great influence on later generations of singers. His influence on rock music appeared in 1995, when famous musicians such as Sting, Elton John and Bono participated in a tribute CD.

Through his literary background Cohen was part of two different worlds. The rock scene, the distinguished-looking Cohen remained a stranger in our midst, as he was not taken seriously in the literary world.

Cohen was born in Montreal in 1934. At 17 he went to study literature. In 1956 he published his first book of poetry Let Us Compare Mythologies, which made him famous in a hit in Canada.

Early 60s Cohen traveled through Europe. He ran down finally on the Greek island of Hydra, where he stayed for seven years. He wrote several volumes of poetry and two novels, including Beautiful Losers, which was translated into Dutch as Glorious losers. Of these books were sold over 1.5 million, making Cohen could lead a comfortable life..

In 1967 he settled in the United States and he started writing songs for others. When singer Judy Collins had great success with his song Suzanne, Cohen himself decided to play his songs. In 1967 his first album was released.\n  \n  \n   advertisement

In his lyrics, he refers to his lost loves, the Bible and the war. So was his Who by Fire based on a prayer that Jews say Atonement. Early 80's records were only received moderate. But in 1988 he was back with all I'm Your Man. The album, with songs such as First We Take Manhattan, Is not No Cure For Love, reached in many countries the number 1 in the charts.

In the 90s, Cohen retired to a Buddhist monastery on a mountain in California. For five years he spent in meditation much time. In 1999, Cohen came down from the mountain with hundreds of new poems and songs.

Once back in the inhabited world, he noticed that humanity meantime had not improved. He discovered that he was ripped off by his manager, giving him $ 5 million was made lighter. In his old age was the old bard practically strapped and he was forced again to record CDs and go touring. In 2013 he went back to the Netherlands.