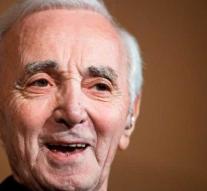 st.petersburg - Charles Aznavour was hospitalized in St. Petersburg on Wednesday. The 93-year-old French singer became unwell during the rehearsal prior to his concert in the Russian city, reports the state news agency TASS. What is wrong with him is not clear. The concert that Aznavour would give was postponed.

Aznavour is considered one of the biggest chansonniers. His seventy-year career produced 294 albums and 1200 songs, including the classics La Bohème and What Makes a Man. Despite his age, he still performs frequently. In March, Aznavour gave another concert at AFAS Live in Amsterdam.