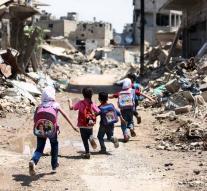 moscow - The new truce that Russia and the United States have agreed in Syria endures. Which has declared the Russian Defense Ministry Saturday.

At the beginning of the night from Friday to Saturday was a,, regime of silence 'in Syria in which Russia and the US had become the Friday once. The term was previously used for a cease-fire in Ukraine.

According to Moscow it has since remained quiet among others east of capital Damascus and in the northern coastal province of Latakia. In that province was talk of,, provocations' of militants.