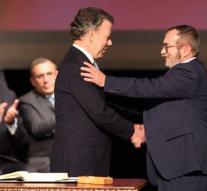 bogota - Colombian President Juan Manuel Santos and Rodrigo Londono Thursday have put their signatures on behalf of the FARC rebel movement under the revised peace agreement to put an end to 52 years of war.

That happened at a much more sober ceremony than last month when the first version was ratified. However, it was unexpectedly ordered by the people in a referendum to the trash because it was too forgiving with respect to the Marxist rebels. Opposition leader Alvaro Uribe argued the opponents and demanded changes.

Santos and Londono signed the amended agreement in a theater in Bogota with a pen made from a bullet. Spectators shouted: 'It worked. 'Congress must still approve the new pact. Uribe is upset that there will be no second referendum.