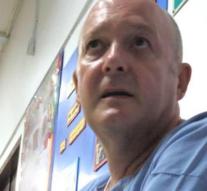 Bergkamp frequently asked questions in Parliament about the situation of Van Laarhoven. She called to meet the Minister of Security and Justice in tension the former coffee shop owner to the Netherlands.