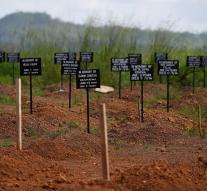 There are in the West African country in the last 42 days no new infections were reported. In the capital, Freetown, thousands of people onto the streets to celebrate the epidemic is over. The dead were remembered.