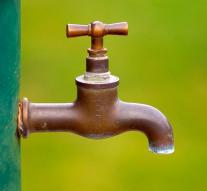 - The Sicilian city of Messina is after a landslide almost a week without water. More than 240,000 residents receive water from tanker trucks.

A mudslide came Saturday visit a water pipe on the south side of the city, Italian media reported Friday. Schools, colleges and offices are closed in the city.

The residents of the city are becoming increasingly annoyed about the situation. " I feel again like during the war ", a woman said to the newspaper La Stampa, as she stood with a jerry can in line at a tanker.

On the island rainfall suffers regular landslides. Italian Prime Minister Matteo Renzi called it a shame that the repair of the pipe so long overdue.