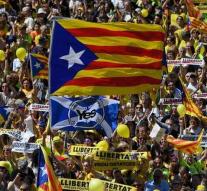 barcelona - Approximately 300,000 people have taken to the streets in Barcelona to demand the release of the separatist leaders imprisoned by Spain. They are stuck because of the organization of the illegal referendum on independence on 1 October.

The demonstration is organized by 'Espai Democràcia i Convivència' (Space for Democracy and Coexistence), a platform recently established by dozens of political and social groups, including the National Catalan Assembly (ANC) and the cultural association Omnium Cultural, according to Spanish media.

It is six months since the Spanish authorities imprisoned Jordi Sánchez, the intended successor of the deadened Catalan leader Carles Puigdemont and the leader of Omnium, Jordi Cuixart. The motto of the demonstration is: 'For rights and freedoms, for democracy and cohesion, we want you at home!'