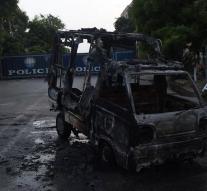 - Supporters of the secular party Muttahida Qaumi Movement (MQM) Monday shots are fired at the office of ARY television station in Pakistan's Karachi. They find that the media pay too little attention to a hunger strike that has been going on among supporters of the party. Karachi is the largest city in Pakistan.

According to local media, the gunmen broke into the office of the TV channel in after MQM leader Altaf Hussein, who lives in exile in London landscape, had criticized the Pakistani media. Security forces intervened, but several people were injured in the fighting.

The hunger strike began on August 18 in protest against cruelty and injustice,, '' of the government against supporters of the MQM.