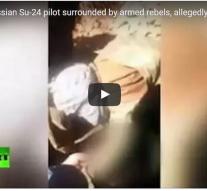 - The pilot died from the Russian jet fighter is brought down by Turkey, Wednesday buried with military honors. That happened in the Russian city of Lipetsk.

The unit of Oleg Peshkov was on November 24 at the border between Turkey and Syria shot down. The pilot managed to save themselves according to Russian defense officials with his ejection seat, but was subsequently suspended from his parachute shot dead by militants.

Peshkov was before he was ordered to the earth 's highest military award of Russia.