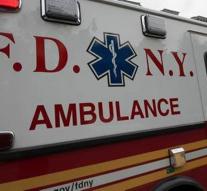 new york - At a shooting in a hospital in the Bronx, New York, two people were wounded on Friday afternoon.

The police warn people to stay at the Bronx Lebanon Hospital from Twitter. The shooter would have shot on one of the top floors. According to unconfirmed messages, the man would be a former employee of the hospital.