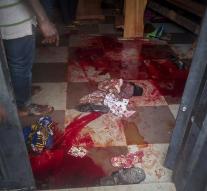 ABUJA (ANP / RTR)- A group of men opened fire on Sunday in a church in Ozubulu, southeast of Nigeria. They shot eleven people dead. Eighteen others wounded.

The police reported that the attackers would probably have shot a man from whom they thought he was in the church. According to the police, however, he was not among the eleven people killed by the shooting.

The police suspect that the violence was the result of a fate between two groups of Nigerians. There may be a dispute about drug trafficking.