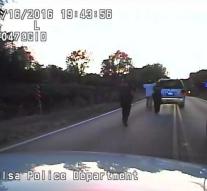 tulsa - The unarmed black man who was shot in Tulsa (Oklahoma) in September by a white officer had drugs in his body. It involves PCP, side-effects include hallucinations, confusion and restlessness.

There is autopsy carried out on the body of the 40-year-old Terence Crutcher, the results of which were known Tuesday. He had 96 nanograms of PCP (phencyclidine) per millimeter in his body, according to the coroner enough for acute poisoning.

Earlier, police said they found drugs in the car of the man. The death of Crutcher led America to stir in the black community. The policewoman Betty Shelby, who shot him was charged with manslaughter.

She had come to a notification that a car was abandoned in the middle of the road. Camera images can be seen that the driver, Terence Crutcher, sticking his hands in the air, walks to the car and leans against the vehicle. A police officer then used an electroshock weapon against Crutcher, who was shot by Shelby thereon.