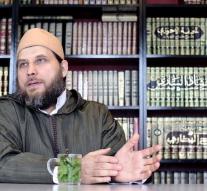 the hague - The municipality of The Hague spends a short trial against the controversial Sheikh Fawaz Jneid. The imam and his foundation Qanitoen held again Friday prayer service in the illegal mosque in the Transvaal.

Mayor Krikke announces that her patience with the foundation is 'up'. 'Now that the foundation refuses to stop, we only have to take legal action. 'The Sheikh, who was convicted earlier on the conclusion of illegal Sharia marriages, violates the rules because only business activities can be held in the premises.