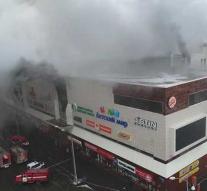 moscow - The deadly fire in a shopping center in the Siberian city of Kemerovo last month was caused by a short circuit. This appears from a first investigation by the Russian Ministry for Emergency Situations, reports the RIA news agency.

Because of the fire in the shopping center on 25 March at least 64 people were killed, including 41 children. This led to great anger among the population and the resignation of the governor of the region.