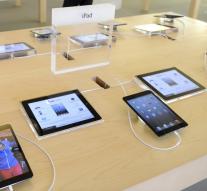 - A shoplifter stole a dummy iPhone at electronics store Coolmix, now he wants to offer a true at the police station.