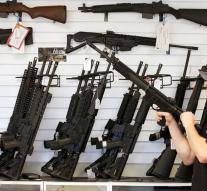 mchenry - The owners of an American gun shop in a suburb of Chicago have found a rather bizarre way to collect money for the victims of the massacre in Orlando. They raffling an AR-15 semi-automatic rifle, similar to the weapon that was used in Orlando.

,, We wanted to do something for the loss of life and injuries, '' explains arms dealer and co-owner Bert Irslinger jr. Thursday in The Chicago Tribune. The wish to make shopkeepers in the town of McHenry say a political statement and that no one would hurt their raffle.

The mother of a man who was killed by another shooting, in a movie theater in Aurora, thinks otherwise in the American newspaper. The woman from the region of the store calls it an unseemly publicity stunt.


The store will announce the winner of the rifle on 31 July. On that day, Second Amendment Sports namely opens a new shooting range and new showroom.