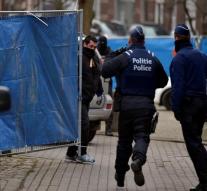 A week before the attacks in Brussels on 22 March, a Belgian-French police team shot with a Kalashnikov when she wanted to do a search of the Driesstraat. After a siege Belkaid was slain, but two runners, including Abdeslam, managed to escape. The duo was arrested three days later in the neighboring commune of Molenbeek.

Abdeslam is suspected of involvement in the November 2015 attacks in Paris Belgium has extradited him to France, where he is in prison.