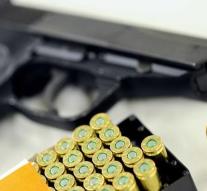 vienna - A father (50) and a son (21) in Vienna have provoked a great police action with the shooting range they had set up on the roof of their home. When residents heard the cry, they alarmed the massive police.

The two shots were loose with their gas guns when special units of the Vienna police arrived and wound the job carefully. According to the police, shooting was life-threatening and could have been flying around flying bullets.

The police took two gas guns and 1300 pieces of ammunition, according to Austrian media Friday.