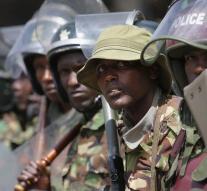 mombasa - Certainly two people were killed and several students were injured on Tuesday when armed men opened fire on vehicles with students on their way to a technical university in Kenya.

'It's a bus with students from Mombassa Technical University and a van with staff and two agents. About ten armed men came out of the bushes and shot the front of the van, 'police reported.

The two victims were female employees of the university. One driver and two agents were injured, police reported. How many students got injured is still unknown.

A witness who wants to remain anonymous said they and other students had fled their vehicle when the men directed their weapons on them. She had seen how students were under the blood.

It is unclear who the shooters are. The al-Shabaab terrorist organization regularly conducts attacks along the Kenyan-Somali border and the coast. In 2015, the terrorist movement attacked the University of Garissa, bringing 148 students alive.