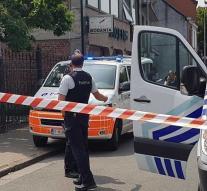 ghent - The jeweler from the Belgian village Oostakker, who shot a suspect of a robbery on Saturday afternoon, was released under conditions by the investigating magistrate. This is reported by the Ghent department of the East Flanders parquet. What those conditions are, has not been disclosed.

After the robbery the jeweler had shot at the street on his assailants who ran off on a moped. The one who was on the back was killed, according to the spokesperson for the prosecutor's office. The other robber is still fugitive. According to the police investigation, the robbers did not shoot themselves.

Further research must determine whether there is self-defense. The man was led on suspicion of manslaughter, but the investigating judge released him under conditions. 'The man cooperates very well in the investigation,' according to the spokeswoman. 'The first interrogations would show that the robbers worked very aggressively The jeweler would have been kicked and beaten and threatened with a firearm. family members of the jeweler and customers would be threatened with a firearm. '