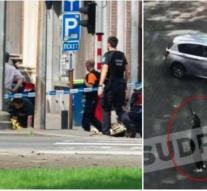 liege - The man who shot three people in Liege on Tuesday spared the cleaning lady who he held shortly afterwards in a school. Benjamin Herman had asked her if she is a Muslim and participates in Ramadan. When she confirmed that, the 31-year-old Belgian assured that he would not do anything to her.

The woman, Darifa, told the French-speaking channel RTBF. 'I told him he was in the wrong place. This is a school, here are many children. 'When Herman walked to the playground, Darifa began to cry and scream, after which she asked him to surrender to the police.