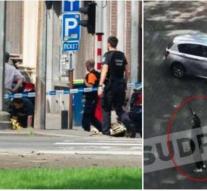 brussels/liege - The man who shot three people in Liège had been in the picture with the Belgian intelligence service since last year because he had radicalized in prison. The newspaper De Morgen reports this on the basis of sources surrounding the research.

Benjamin H., who was 31 years old and not 36 as previously reported, was allowed to leave the prison on Monday for a 36-hour leave. He had to serve a prison sentence until 2020. For the past fifteen years he was more or less in prison, often for minor offenses such as theft and drug law offenses.

After a police check got out of hand, he attacked two agents with a knife on Tuesday, grabbed their service weapon and executed the women aged 45 and 53. Then he shot a 22-year-old student who drove by in a car. Video footage shows that H. called 'Allahu Akbar'.

In the shooting, four officers were also injured in their legs and arms, one of whom had already left the hospital, said the chief of police of Liège at a press conference. From the number of bullets that H. fired, according to him, it appears that the shooter had clearly targeted the police. He shot him after he had taken two employees of a school hostage.