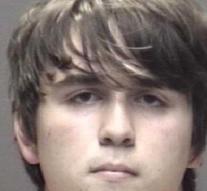 santa - The teenager who shot ten people in a school in the Texas city of Santa Fe on Friday and injured ten, is the 17-year-old Dimitrios 'Dimitri' Pagourtzis.

On his Facebook page, the teenager posted a photo of a T-shirt with the text 'Born to kill', reported American media. According to Governor Greg Abbot, information was found on his computer that made it clear that he not only wanted to kill others, but also himself. 'But he did not have the courage,' said the governor.

The boy, who according to a classmate was very quiet and wore a trench coat every day, reportedly hid his gun under the coat. He ran into an art class, after which he called 'surprise' and opened the fire. According to the governor, he had a gun and a revolver with him, borrowed from his father.