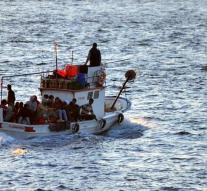 rome - Shipwrecks in the Mediterranean have certainly 340 migrants killed in two days time. In total, perished four boats, reported the International Organization for Migration (IOM) on Thursday. MSF is one of the decaying vessels 27 people have saved. But in total were on that boat, which had departed from Libya, 130 migrants.

'This tragedy is simply intolerable', the aid organization wrote. The IOM recently reported already having reached a record number of people killed in 2016 during the dangerous crossing to Europe. In 2015, the total number of dead and missing amounted to 3770. This year, fell so far more than 4,200 victims, according to the IOM.