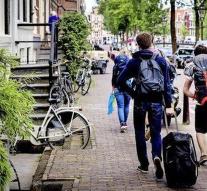 amsterdam - The agreements between the municipality of Amsterdam and Airbnb seem to be beneficial. According to Het Parool, another 5 per cent of the houses offered on the website are rented for more than sixty days. A year earlier, in May 2016, it still occurred in 13 percent of the offered accommodations.

The market leader in residential property rental in Amsterdam signed an agreement with Amsterdam to remove rentals from the site for more than 60 days. This concession from Airbnb has thus resulted in a decrease of almost two thirds in the number of homes rented for too long.