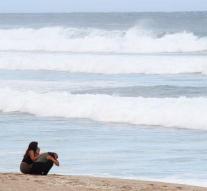 fremantle - An Australian fifties died Tuesday at a shark attack in the Pacific near the island of New Caledonia, east of Australia.

The man was with a group of kitesurfing in a reef when he fell and was bitten. The others raised the alarm. Although there soon came a lifeboat on the spot, to no avail assistance.

It is the second fatal attack by a shark in the area in half a year. In April, a woman on the beach of New Caledonia bitten by a shark. They did not survive the attack as well.


Last year there were 98 shark attacks worldwide, a record, say scientists from the University of Florida. Six of the attacks were fatal. Researchers suspect that the behavior of sharks is changing due to global warming.