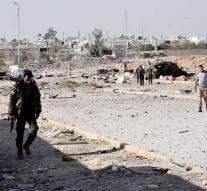 aleppo - Thousands of rebels still waiting in eastern Aleppo on evacuation from the former rebel enclave. A spokesman for the rebel group Ahrar al Sham said Thursday that the evacuation is difficult because of the bad weather.

It's cold and snowing in Aleppo. Additionally be used in the evacuation forced many vehicles are in poor condition. According to the Red Cross Wednesday a total of 30 000 people, including all the sick and wounded and children to safety.

The eastern part of Aleppo was four years in the hands of rebels. With the support of, inter alia, Russia and Iran, the military has Assad almost entirely reconquered this area on the insurgents.