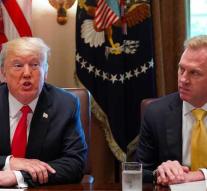 washington - Patrick Shanahan succeeds James Mattis as US Secretary of Defense. President Donald Trump announced this in a tweet on Sunday. Shanahan was Deputy Minister of Defense under Mattis.

He resigned after Trump decided to withdraw the American troops from Syria. Shanahan (64), who made his career at aircraft manufacturer Boeing, follows him on 1 January, Trump informed.

Mattis stated on his resignation that he would stay at the ministry for a while to enable the president and the Senate to find a successor, and that has happened faster than expected. Officially, Mattis would retire in February after two years of ministry.