Home / World / 'Shakespeare was not a language innovator ' 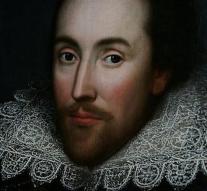 melbourne - Literary Britain shaken to its foundations now wrote the Australian professor David McInnes William Shakespeare nowhere was such a great innovator language as the Brits would have you believe. The scientist claims that the famous Oxford English Dictionary (OED) greatly exaggerates when many words attributed to Shakespeare.

The expenditure of the OED were ever more than 33 000 quotes from the famous British playwright and poet. In an article for the University of Melbourne McInnes called the dictionary 'biased.' The name of William Shakespeare as author of a phrase or word was far better than those of less famous literary men, he writes.

The famous author has certainly not all those thousands of words and phrases invented that are attributed to him, according to the professor. Most have long circulated. His audience was, after all, be able to understand the meaning of his pieces.


The publisher of the dictionary said in a reaction that it happens to be just doing a major review of the Shakespeare Contributions, writes The Guardian.