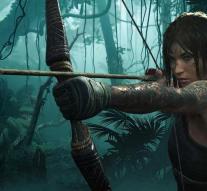 - Lara Croft has been running the hearts of many gamers for 22 years now, her popularity has not gotten any worse over the years. Shadow of the Tomb Raider is the final piece of a successful reboot of the series.

Already in 1996 Lara Croft, a female version of Indiana Jones, was to be admired for the first time. In 2013, publisher Square Enix blew new life with a more realistic Lara in the lead. That was a daring step. Because if you want to make Lara more realistic, you can not get around to curb her façade and stretch her waist. Precisely that appearance was an important reason for her popularity.

Fortunately, the cosmetic procedures worked out well. Female gamers were downright enthusiastic, and male gamers were less sexist than feared. In the first part, a cinema version was released this year.

Immediately afterwards the final piece of the 'new' Tomb Raider series appears. There is no lack of ambition. Lara Croft is better prepared for danger than ever before in Shadow of the Tomb Raider. For the story Jill Murray was flown in, who previously took care of Assassin's Creed IV, among other things.

This game takes place completely in South America, where Lara hunts historical objects while the godly but trickle-knit organization Trinity wants to make her a little smaller. In the meantime, a total apocalypse is threatening because Lara has accidentally captured one object too much.

After two very good parts, Square Enix wanted to build on the success in this final piece. So expect a lot of cunning, beautiful views and the inevitable battles with her hereditary enemy Trinity. Who has been entertained with the previous parts, will certainly not be disappointed.

That means that everyone who secretly hoped for a renewed Lara Croft, is disappointed. All right, there's nothing wrong with the storyline and the fact that Lara is more mature makes for more exciting action. But it would be a great honor to label the makers' choices as original.