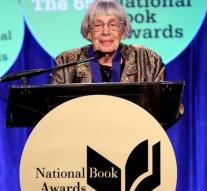 portland - Ursula K. Le Guin died in her home in Portland (Oregon, USA), a writer of science fiction and fantasy. She was 88 years old. Le Guin was renowned for her books from the Earthsea series.

Le Guin wrote numerous books, also for children, short stories but also poetry. Her book The Left Hand of Darkness from 1969 received many prizes, as did The Dispossessed from 1974.

Le Guins son announced that she died on Monday evening, presumably from a heart attack. His mother continued to write, until two months ago.