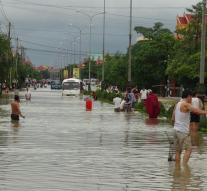 - Least 25 people in Vietnam killed by floods after heavy rains. The Vietnamese service for emergency response reported Monday that the damage is great.

In the middle of the country the storm destroyed nearly a thousand homes. Approximately 120 000 other homes flooded. Television footage shows people have fled to the roof of their house. Half a million people have had to leave their homes.

Meanwhile, the next storm presents itself. Meteorologists expect Typhoon Sarika Vietnam reached Wednesday. The authorities believe that 22 of the 63 provinces in the country it will be affected.