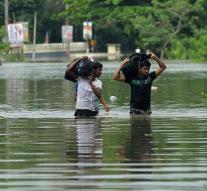 colombo - The death toll from the storm in Sri Lanka Thursday rose to definitely 58. More than 300,000 people have fled their homes, an army spokesman confirmed.

Extreme rainfall caused the last few days in the center and west of the island of floods and landslides. In the night from Tuesday to Wednesday two villages were in the Kegalle district, some 100 kilometers from the capital Colombo, buried under mudslides. The authorities fear that there are more victims. About 140 people are still missing.