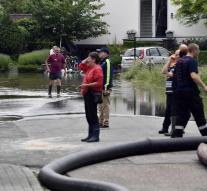 brussels - The heavy rainfall in Belgium has claimed the life of a third person. Monday night of an elderly woman's body was found earlier that day was swept away by the water, the mayor of Welkenraedt reports where the accident occurred.

She was with six others to look at the problems that caused the water, but was at the shelter under a bridge surprised by the rain. After hours of searching, her body was found in a water storage.

The heavy rains also took a 83-year-old man in the Walloon municipality of Momignies life. The eighties was Sunday night slipped into his flooded basement and minutes remained under water. He was taken to hospital in Chimay, where he died Monday morning. The rain houses ran into Macquenoise, part of Momignies.


Friday was the lifeless body of a retired beekeeper found in the province of Luxembourg. He was swept away by a river when he wanted to bring his hives in safety.