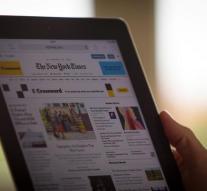 - Several US news organizations including The New York Times have been hacked. The authorities suspect that the digital intrusions, which were noticed in recent months, are the work of hackers working for Russian intelligence, said US sources told CNN Tuesday.

Various government agencies, including the FBI, investigating the hacks, according to CNN. They think the digital break-ins are part of a broader campaign, which was also the Democratic Party target. A week before the Democratic convention last month, Wikileaks published a collection of emails booty made the hackers at the Democratic National Committee.

A spokesman for the New York Times wanted to confirm the CNN coverage nor deny.,, Like most news organizations, we are vigilant for possible hacks in our systems. We will not comment on specific attempts. ''