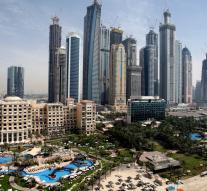 - The number of 'super high' skyscrapers has doubled in five years. Since the completion of part of the skyscraper 432 Park Avenue in New York late last year, a total of one hundred skyscrapers of 300 meters and higher in the world. That left the Board of tall buildings and urban habitat (CTBUH).

The number of super tall buildings continues to grow. In the next five to six years will increase the number by another hundred.

The Burj Khalifa in Dubai is 829.8 meters still the tallest completed building in the world. But the tower faces competition from the Tower Jeddah in Saudi Arabia, which is being phased out in 2020. That tower must be 1008 meters.

The number of 'mega high' towers is not too bad. According to the CTBUH there are three buildings higher than 600 meters. There are four more under construction.