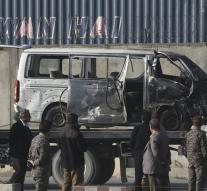 kabul - In a suicide attack targeting a vehicle containing security forces Wednesday in Kabul at least four people dead and injured many.

The Ministry of Interior of Afghanistan confirmed the attack but could give no further details about numbers. A security guard has told Reuters that definitely mentions four dead and that the action was aimed at a vehicle safety workers.

A ministry spokesman said the purpose of the attack is unclear. ' The suicide bomber was on a motorcycle and blew himself up in the Pul Mahmood Khan area. '

The attack has not been claimed immediately.