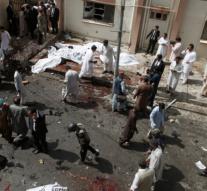 - Islamic State terror movement has claimed responsibility for the attack on Monday in the Pakistani city of Quetta to dozens of people killed. The claim is notable because earlier in the day a splinter of the Pakistani Taliban said they were behind the attack.

Target of the attack was a hospital in the city. The explosion struck a group of lawyers and police officers gathered outside the clinic. The group of people had gathered at the hospital after the head of the Bar Association of Baluchistan province, where Quetta is located, in the morning was shot and deceased. The death toll now stands at seventy, but it is not excluded that it continues to rise.

Earlier Monday Jamaat-ur-Ahrar said to have committed the attack. The group split in 2014 from the Pakistani Taliban.