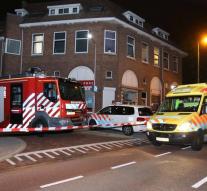 schiedam - Seven people died in the night of Friday on a Saturday in a house in Schiedam because they breathed in smoke. It is about three adults and four children, including two babies. They have been taken to the hospital for possible carbon monoxide poisoning.

Notification of the smoke in the house on the Nicolaas Beetsstraat arrived at 01.45 am. When the fire brigade was looking for where the smoke came from, they encountered the meter cupboard. A spokesman announces that a potential drugslab in the neighboring property has been the cause.

The fire department has transferred the situation to the police who is conducting research. The police report on Twitter that a site was found where heroin was cut.