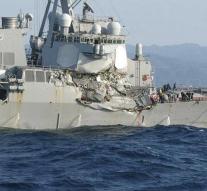 washington - Seven crew members of an American navy ship were missing Saturday after the ship had a collision with a Filipino container ship. At least three people were injured in addition. The accident took place southwest of the Japanese city of Yokosuka.

The warship caused damage and water. The Japanese Coast Guard has brought the Naval Ship Commander to the hospital by helicopter. Two other crew members are also included in the hospital. The twenty people aboard the container ship remained unharmed.

The US Navy indicates that there is no risk that the ship will sink. However, she confirms the messages that seven people are still missing.

Torpedo boat hunter USS Fitzgerald arrived around 02.30 am (local time) due to an unknown cause in collision with the container ship ACX Crystal. Yokosuka is located at the mouth of the Bay of Tokyo. The nearby waters are busy fishing routes.