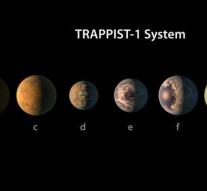 - Astronomers have discovered a dwarf star seven planets that are about as wide as Earth. Three of them are similar in mass and climate on our planet so that there could be possible water and life.

Never before has such a large number of planets the size of Earth in a planetary system discovered which may be extraterrestrial life. Lead researcher Michaël Gillon of the STAR Institute of the University of Liege, which publishes about it in Nature, is delighted: ' This is an amazing planetary system. '

The studied small red dwarf star called Trappist one, named after the telescope with which the discovery was made. It is a very small star; about as big as Jupiter is in the constellation Aquarius at 39 light years away from Earth. The terrestrial planets have marked Trappist 1b, c, d, e, f, g and h given. The six inner planets are likely to have a rocky composition.

All seven planets could have liquid water on their surface, although in the first e, f and g is the most obvious. Gilon: ' These can be considered the holy grail of planet hunting: they are in the habitable zone of its star and can accommodate oceans of surface water. The planets 1b, c and d are likely to be hot and h is possible too cold. '

' My heart beat faster when I heard the news. When these scientists began five years ago to look for planets around small stars, I thought it was madness. I did not expect that so many Earth-like planets occur around small stars, 'says Ignas Snellen. He is a professor of astronomy at Leiden University. Also aerospace expert Piet Smolders is lyrical. ' If I hear such news, I become immediately impatient. What you want to know is whether there is also life. '

Or is there life starts with examining whether there is water. Race: 'It is relatively easy to investigate and will take place at the three planets that seem to have fluctuated a climate between Mars and Earth. The atmospheres of those planets that are from here only forty light years, we can investigate it. The arrival of the James Webb Space Telescope is an analysis of the atmosphere that is sure to help in a few years. Then comes the question of whether there is life; What gases are there. Is there oxygen? That answer can we possibly expect about eight years as the European Extremely Large Telescope is finished. '

That confirms Smolders: ' The question of how the atmosphere of the terrestrial planets is composed and whether plants or animals occur, may indeed perhaps be answered as better telescopes there. My patience is very challenged. '