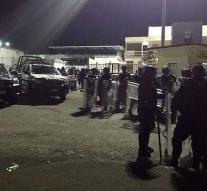 mexico city - Seven Mexican police officers were killed when they tried to suppress a prison revolt in Amatlan de los Reyes in the eastern state of Veracruz. The authorities confirmed this in the Mexican media on Sunday.

There were no reports of fatalities among the detainees who, according to reports, had been broken from their cells after having lit mattresses. There were, however, several injuries. The uprising started Saturday night. It took almost twelve hours to restore order.