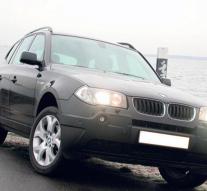 amsterdam - Dirk Hermans comes with a fright: the BMW X3 that made parking Belgians 'Valet' at Schiphol Airport, which was then miraculously stolen, after months of wrangling yet reimbursed by the company Central Parking. The parking company on Tuesday night under threat of a lawsuit reached a settlement with him.

Hermans left his car recently at Schiphol behind when he went on holiday with his family. Upon returning revealed his brand new BMW X3 disappeared. 'Allez, in fact, not a trace. I received later still a speeding ticket in the mail. My car was flashed during holidays on a highway in France. '

It is a specter that virtually anyone keys handed will have had a member of a so-called 'valet' parking service: i'm ever back my car?

Hermans, Director of the Belgian packaging Miko, was strange to watch when he was not as promised in his car at the arrival was waiting for him after his return reported by Central Parking at the airport and a driver. 'Initially they claimed they had lost my car keys, so we got the offer to be taken to our home in Turnhout. Such a thing can happen, 'says Hermans.

With the spare keys in your pocket drove the employee of Central Parking subsequently from Belgium back to Schiphol. 'But soon it turned out that the whole story was completely fabricated about the lost key and they just could not find my car anymore. He was stolen from under their noses! While the company advertises constant surveillance of their lot, 'grumbles the Belgian. To make matters worse refuses his car insurer also to compensate the damage theft of over 40 000, because he has given up the key. Therefore, the Belgians decided to drag the parking company this week to court in order to get to recover damages.

At Central Parking one has a different version of events: 'The Mr. Hermans car is never delivered to us,' says director Meynald Weatherman. 'He probably his BMW to someone else, or does it even not ceded. There are no pictures of the car on our property. Not even Mr Hermans, 'said Weatherman, which thus suggests that the Belgians invented the complete vehicle theft.

But to the whole thing and the associated negative media coverage to be off, Weatherman decided just before the session to a settlement with Hermans. What amount exactly is paid by Central Parking, those involved do not want to tell. 'We have so agreed,' said Weatherman.