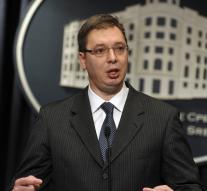 - Serbia spends more than 5 million euros in the Bosnian Srebrenica. That the Prime Minister Aleksandar Vucic Serb said Wednesday during a visit to the place.

Twenty years ago, were murdered by the former Muslim enclave by Serb forces 8000 men and boys. Serbia wants the donation to make a gesture of reconciliation to the still underdeveloped area. The money is used to finance schools, roads and projects in the health sector.

Vucic also visited the burial of Bosnian Muslims in 1995 were victims of the massacre. Four months Vucic back was even expelled from Srebrenica by protesters when he attempted to attend a ceremony commemorating the atrocity. Wednesday he laid flowers at the cemetery.

The visit of Vucic, who the bloody nineties to the Serb nationalist hardliners " heard reflects the improved relations between Serbia and Bosnia, as well as Serbian aspirations to join the European Union.

Vucic said Wednesday that he had come to support the development of Srebrenica. " I want Srebrenica a bridge of our cooperation will ", he said. " Nobody can bring back our brothers to their sisters or sons to their mothers, but we can create a different and better future. "