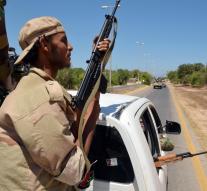 belgrade - Two Serbian embassy employees kidnapped Sunday in the Libyan coastal city of Sabratha. According to the Serbian Ministry of Foreign Affairs refers to the press- attaché and his driver.

There is no reason given for the kidnapping. Syrian diplomats in Libya were unavailable for comment. But an official of the Serbian Government who requested anonymity said: " It looks like an ambush, a shooting. "

Libya is a lot of turmoil with its internationally recognized elected government and parliament on one side and a self-proclaimed government in Tripoli, on the other hand, each supported by regional, tribal or Islamist armed groups.

Belgrade maintains diplomatic relations with the internationally recognized government in Tobruk. Earlier, the country maintained ties with the government of Muammar Gaddafi until it was ousted in 2011.