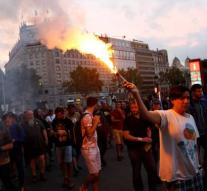 barcelona - Hundreds of Catalan separatists have blocked traffic arteries in several places, including the track of the high-speed train AVE in Gerona. In Barcelona, ​​among others, the central Via Laietana is blocked. A railway is also blocked at Tarragona.

Activists of the separatist Committees for the Defense of the Republic (CDR) predict 'a hot autumn' with many protests.

It is Monday a year ago that the then separatist government of the Spanish region led by Carles Puigdemont held an illegal referendum on independence. Approximately 40 percent of the voters, almost exclusively separatists, cast their vote and 90 percent of those voters voted for secession. This was sufficient reason to declare independence for the organization of the 'referendum'.

At the end of October 2017, the Spanish government intervened. Puigdemont fled to Belgium.