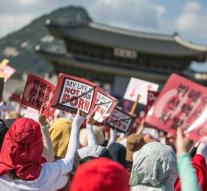 seoul - In the fight against peeping, the South Korean capital Seoul is going to inspect daily whether there are no hidden cameras in public toilets. The city council has announced the ambitious plan on Sunday, reports the South Korean news agency Yonhap.

In the metropolis, with about 10 million inhabitants, there are more than 20,500 public toilets. For the time being, fifty officials were responsible for checking the toilets for cameras. The city council wants to recruit another 8000 inspectors, mainly by recruiting people who are already responsible for the maintenance of the toilets. Around one thousand toilets are designated as a 'risk toilet' and are checked more often.

The plan follows national outrage over the growing number of cases of sexual violence and secretly recorded nude images. Despite the efforts of the fifty toilet inspectors, however, no hidden cameras have been found in the past two years.